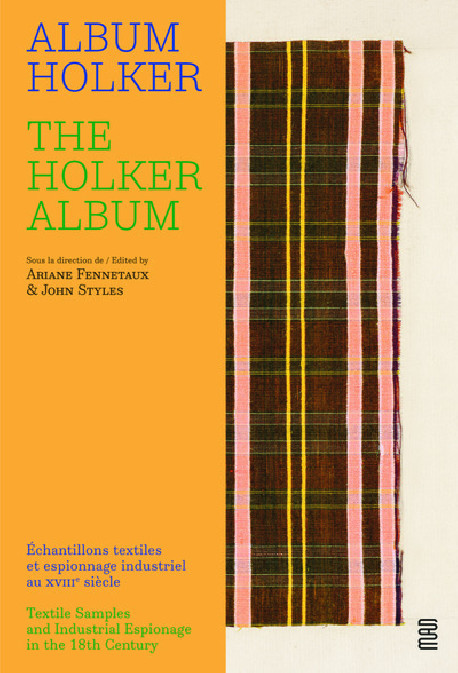 A facsimile edition of the Holker Album, a unique album of textile samples. In 1751, John Holker (1719-1786), an English textile manufacturer exiled in France, undertook a perilous industrial espionage mission to England to collect samples of English textiles on behalf of the French king, Louis XV.

John Holker started out as a modest textile calenderer at Manchester. The success he was to achieve as key figure in the French textile industry was not predestined. A Catholic and supporter of the deposed Stuart dynasty, in 1745 he joined the unsuccessful Jacobite rebellion against the Hanoverian monarchy in Britain.

Captured, imprisoned and facing a charge of treason, he escaped to France. There he joined a Scottish infantry regiment in the French army, consisting of Jacobite exiles.

In 1751, Holker returned to England, though still a wanted man. His secret mission was to recruit craftsmen skilled in English textile manufacturing techniques and bring back tools and fabric samples. On his return, the samples were assembled in a manuscript volume, which is now preserved at the Museum of Decorative Arts in Paris.

In recognition of the mission’s success, the French state gave him financial support to start manufacturing cotton textiles at Rouen using English technology. In 1755, he was appointed Inspector General of Manufactures, responsible for improving the textile industries throughout France.

Each sample in the Holker album is accompanied by a handwritten technical description specifying the quality of the fabric, its price, its dimensions and the manufacturing processes.

The album is famous for preserving the oldest identifiable samples of jean fabric, but has rarely been seen by the public. Completely bilingual, the book includes a facsimile reproduction of the album, accompanied by a transcription of its handwritten text and a dozen essays by experts. The essays, written by academics, curators and specialists from France, Britain and North America, explore the album from various angles: the globalization of commerce, the slave trade, industrial espionage, economic rivalry between France and England, the taste for cotton and its role in the history of fashion, etc.

The book demonstrates the importance of centuries-old links between France and the United Kingdom and is an indispensable work of reference for the history of textiles.