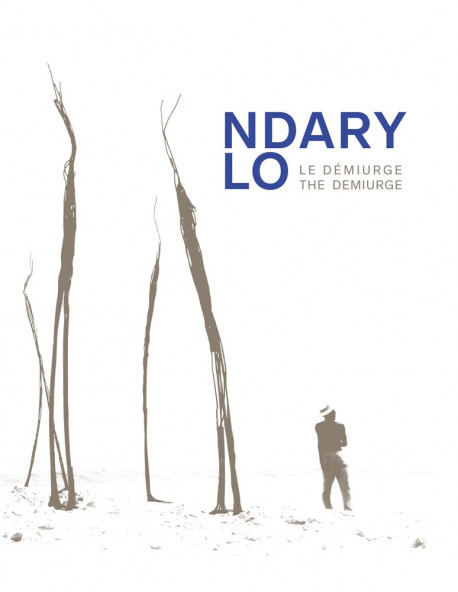 Ndary Lo (1961-2017) is renowned as a highly talented sculptor whose reputation has spread well beyond the borders of his native country, Senegal. Departing this life all too soon, he has left behind an assortment of willowy figures and many unanswered questions.

His oeuvre tends too casually to be encapsulated by just his Walkers but is in fact the work of a real demiurge. This artist certainly used sculpture to express himself, but he also created a number of installations that rarely appear in the publications that discuss his art.

This book is not intended to be either a critical or exhaustive evaluation of his work, but rather to shed light on some of its little known or even totally neglected aspects. The aim is to provide a rounded portrait of an artist with a complex personality, whose notably eclectic art developed over many years and was the object of constant review, from both a technical and intellectual standpoint.

The various facets of his oeuvre are examined by those who were close to the artist and knew him personally, often following his development over the years. Several of them assisted him in creating some of his major works. This book is designed to fill the gaping void created by his premature death.

The essays by these well-known authors are further supplemented by several biographical details that have never before been brought to light, as well as numerous photographs that help place the artist and his works in the context of his world and ours.

At a time when African artists are beginning to establish themselves on the international art market, this tribute, without straying into hagiography, offers a welcome new stepping stone in the recognition of a figure who is already regarded as one of his country’s most important artists.

The reader will be able to explore the artist’s innermost feelings, grasp his intentions, and follow the winding path of his creative processes. Ndary Lo’s notebooks are used to flesh out the content of the text throughout the book, providing material for some of the essays and acting as visual records to complement the array of illustrations. Now, at last, Ndary Lo’s oeuvre can be admired in all its diversity.

Scattered throughout the book are photos of the artist’s emblematic sculptures, both familiar and less well known, as well as archive photos showing works in situ, as part of installations that have gone down in history. These are included both in conjunction with specific passages of text to aid understanding and in a special photographic section. But what they also do is capture the artist as he spreads his wings, a theme dear to Ndary Lo.