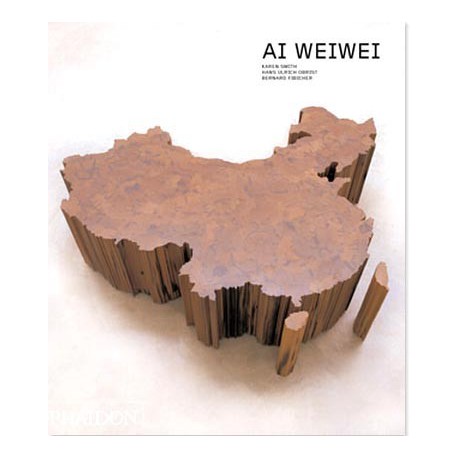 Ai Weiwei’s work is consistently innovative and unmistakably original, ranging from his sculptures and photographs to his numerous architectural commissions, and recalls the work of his artistic forebears Marcel Duchamp, Joseph Beuys and Andy Warhol.

A towering figure whose influence can be seen in the multiplicity of his roles: not just an artist, designer and architect, but also curator, publisher, web blogger and cultural compass for an entire generation of Beijing artists.

In the interview Hans Ulrich Obrist discusses Ai Weiwei's life and motivations, his childhood in a rural province close to the Russian border, his underground political work, his move to New York in the 80s and consequent return to China in the 90s, and his break within the art world.

Karen Smith's survey examines the evolution of Ai Weiwei's work from the early paintings, drawings, and sculptures pieces through his most recent installations and architectural work, including the cotton-made sculpture World Map (Biennale of Sydney, 2006), the wooden doors and windows structure Template (Documenta 12, 2007) and his collaboration with the Swiss firm Herzog & de Meuron for the Beijing National Stadium for the 2008 Summer Olympics.

Bernard Fibicher focuses on Working Progress (Fountain of Light) (2007), a site-specific sculpture for Tate Liverpool inspired by Tatlin's Monument to the Third International (1919) and that takes the form of a spectacular chandelier.