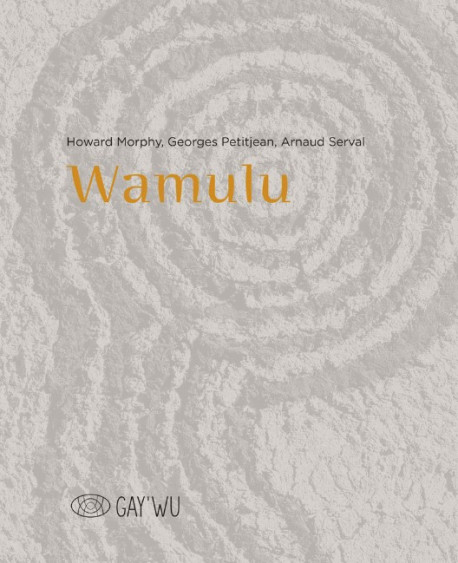 This volume is the second in the Gay’wu. Aboriginal Arts and Knowledge series, the purpose of which is to present monographs dealing with contemporary Aboriginal artists.

Wamulu – a title evoking a yellow desert flower found abundantly in the Alice Springs region and used as a prime material for ground paintings or ground mosaics – is a compilation of the cooperative art work of a collective including the artists Ted Egan Tjangala, Dinny Nolan Tjampitjinpa, Johnny Possum Tjapaltjarri and Albie Morris Tjampitjinpa. Between 2002 and 2005, an exceptional artistic project took place in the Central Australian desert that aimed at with the purpose of rendering permanent ground paintings that are in essence effect impermanent or ephemeral in nature. Ground paintings, an ancient form of art that likely goes back many thousands of years, are originally made created for ceremonial purposes and destroyed once the ritual or ceremony is completed. Never before have durable works of art been created produced using the same materials and technique as conventional ground paintings.

The designs of these works correspond speak to major Dreamings of the desert regions, such as Fire, Water and Emu. The production process entails a coordinated interaction between the owner (kirda) of the Dreaming story and the ‘policeman’ or manager (kurdungurlu) who assists the owner them. Just like their ritual counterparts, these contemporary paintings are the result of a communal performance or happening. Singing is a fundamental and integral part of the process, which happens takes place in the present moment. The pictures are sung alive to life as much as they are composed with matter, emphasizing the continuance of the link with ancestral creation.

Curator of the Collection Bérengère Primat and curator of contemporary Aboriginal art exhibitions at Fondation Opale, art historian Georges Petitjean wrote his doctorate on the art of the Western Desert at La Trobe University in Melbourne. His main area of interest is the transition of Aboriginal Australian art from its original sites to the art world. He has lived and worked in Australia for many years and, since 1992, has closely followed the work of many artists in Central Australia and in the Kimberley. From 2005 to 2017, he was curator of the Museum of Contemporary Aboriginal Art (AAMU) in Utrecht, the Netherlands. In 2017, Petitjean was appointed curator of the Collection Bérengère Primat. He has directed or consulted on numerous exhibitions in Europe and Australia, and continues to write about Aboriginal art and culture.

Howard Morphy is professor emeritus of anthropology in the Research School of Humanities and the Arts at the Australian National University and head of ANU’s Centre for Digital Humanities Research. He has won a number of distinguished awards and fellowships, including the Malinowski Memorial Lecture (1993) and the Huxley Memorial Medal (2013). He has written extensively on Australian Aboriginal art and religion, authoring such works as Ancestral Connections (Chicago, 1991), Aboriginal Art (Phaidon, 1998) and Becoming Art: Exploring Cross-Cultural Categories (Berg, 2007). His most recent book is Museums, Infinity and the Culture of Protocols (Routledge, 2020). His involvement in e-research and in the development of museum exhibitions reflects his determination to make humanities research as accessible as possible to wider publics and to close the distance between the research process and research outcomes.

Fascinated when leafing through a book on Australian aboriginal art, Arnaud Serval decided when he was 19, to go and meet these artists. Over the course of his many trips to Australia, Arnaud Serval discovered the different communities of the Central Desert, the Kimberley and the Arnhem Land. He gained the confidence of great masters, possessors of their region’s knowledge, who embraced him to be at their side and daily-life. He tied emotional and spiritual bonds with huge artists such as Clifford Possum Tjapaltjarri, Emily Kame Kngwarreye, Timmy Payunka Tjapangati, or Johnny Warrangkula Tjupurrula. For almost two decades, Arnaud Serval has been spending several months a year in the Australian bush, sharing the life of his friends, renting spaces such as the Life Centre, where artists come, create, go. Alongside his trips, Arnaud has been committing himself to getting the art of the Aboriginal people to be appreciated and known better in France and Europe.