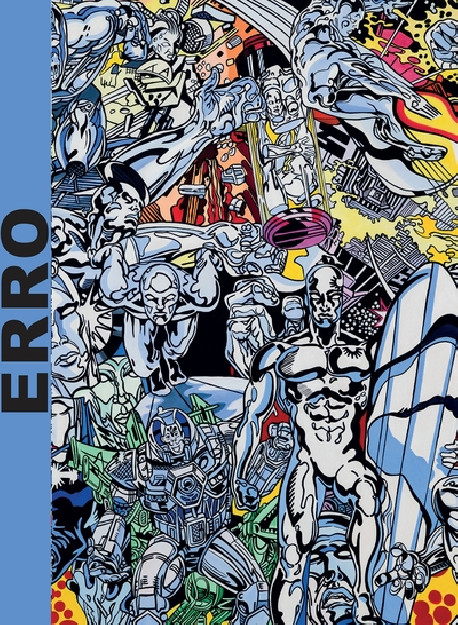 After studying at the Fine Arts of Reykjavik from 1949 to 1951, then at the Academy of Art in Oslo, Erró leaves to learn mosaic in Italy. He moved to Paris in 1958 and thanks to his meeting and friendship with the poet and visual artist Jean-Jacques Lebel he rubbed shoulders with the Surrealists.

3 item in stock items in stock

He was introduced to collage, which was to become the basis of his entire approach, as he wanted to play with images, diverting them from their everyday banality to insert them into a meticulously prepared context.

The representations lose their original meaning, bend to the story that the artist makes them play and it is this new vision in this new context that imposes itself to the spectators. Erró draws from the iconography of both scholarly and mass culture. He collects his images from all continents and his series feature all walks of life in all periods.

He draws from comic books, press photos, scientific books, NASA photographs, exhibition catalogs, propaganda reports, art masterpieces, travel brochures, portraits of stars and politicians... These printed documents are his "provisions" and like William Burroughs he can say "Images, millions of images, that's what I eat!

He assembles them and then transposes them on the canvas freehand to finish by the episcope by seeking an unquestionable aesthetic interest. He details: "Speaking of events from day to day, I seek to witness a moment, a fleeting state of society, before the facts disappear by collective amnesia.

With gravity and humor at the same time, the artist stages all the great subjects of society: drift of politics whose perverse excesses he denounces, mass consumption, obsession with sex, barbarism of wars, Cultural Revolution in China, Revolution in Cuba, Cold War, Israeli-Palestinian conflict... Internationally recognized, a major figure of Narrative Figuration, he declares: "In my eyes, Narrative Figuration must proceed by galaxy of images, without moral or political judgment. Sometimes the desire is strong to compose large spaces, full of information, where there would even be a whole city... Painting is a kind of journey through forms, spaces, styles and not the defense of a precise formal territory.

This passion for recycling is expressed in his encyclopedic compositions, oversaturated with information and colors, marked by the extreme complexity of the composition and carrying a strong critical effectiveness. Behind the quotation, the pastiche, the detour, his works are charged with a certain moral sense, with a real political dimension even if in the radicality of his gesture he never wants to be taken as a militant artist.

His paintings read like the contemporary vanities of a dazzling illuminator who, long before the era of the all-digital world, prefigures the extreme present of instantaneous Internet information.