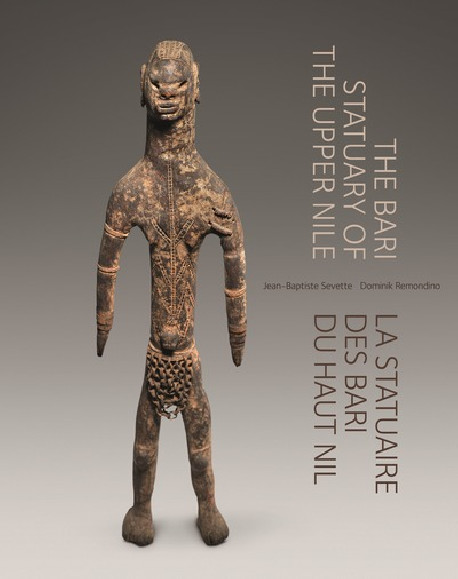 The Bari Statuary of the Upper Nile

This volume is one of a kind; its purpose is to be a reference for readers – scholars, enthusiasts, or the merely curious – on the subject of the Bari statuary of the Upper Nile.

Most of the specimens that can be observed to this day are found in international museums: of the 64 pieces presented in this volume, only 6 come from private collections. These wooden statuettes, none of which is more than half a meter (1.6 ft) in height, were not idols venerated by their owners. Rather, they were likely tutelary spirits that guarded the family and their home.

Jean-Baptiste Sevette, one of the rare specialists in the material culture of Sudan, and Dominik Remondino, an art historian specialized in African cultures, and of course Bertrand Goy in his introduction, describe the present condition of these artefacts, exploring not only the aspects connected to material culture and the peculiarity of this artistic production, but also offering an important overview of Egyptian expeditions to Sudan, of the founding of Khartoum in 1821, and of the first interactions between so-called Westerners and the Bari population, outlining the key figures of early Sudanese ethnographic object collecting.

The son of architect parents, Dominik Remondino grew up in Burundi, a country in the African Great Lakes region. Since his early childhood he has always been acquainted with the culture and both the material and immaterial history of East Africa. He studied history and art history in Geneva, specializing in European medieval art, but he has always had a strong interest in African art as well as primitive art in general.

After working as a photographer in Teheran between 1964 and 1967, Jean-Baptiste Sevette worked for the Swiss Archaeological Mission in Sudan from 1967 to 1982 under the direction of Professor Charles Bonnet. In 2006 he published the volume Bilad-Al-Sudan – Les pâtres du Nil Blanc with 5 Continents Editions. Throughout the years, he has never stopped photographing the everyday life of the Sudanese people, bearing witness to a bygone age.