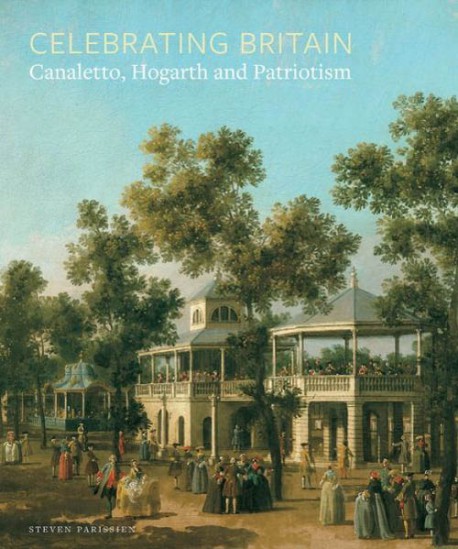 Canaletto's time in Mid-Georgian Britain has received much scholarly attention in the past. But this book places his work in a broader political and social context, linking his paintings and drawings with a growing sense of assurance and mission which the British nation was beginning to display - perhaps best represented by the works of William Hogarth.

By 1750 Britain was - as author Jacqueline Riding shows - at peace with her traditional enemy, France, and had finally extinguished the threat from the Catholic Jacobites. The art of William Hogarth - particularly his great canvas - The Roast Beef of Old England of 1749 - duly reflected this new sense of security and pride in being British. The economy was booming. Trade was expanding. And newly-confident Britons were no longer looking to Italy or France for their cultural exemplars, particularly in the field of architectural design.

It was the ferment of activity, the eclectic building boom which underlines Britain's wealth and optimism, and which marks the nation out as the new Venice, which is the real subject of Canaletto's great canvases. Almost all of Canaletto's views focused on a new architectural commission or a recent urban development, and were specifically designed to celebrate the latest achievements of British architecture and engineering.

The Italian master was not alone. The vigorous and infectious patriotism of his works mirrored emerging nationalistic trends in popular culture during the 1740s, a decade which witnessed the canonization of William Shakespeare as a British hero, the creation of Handel's Messiah and Arne's immortal 'Rule Britannia', and, as Oliver Cox shows, the propagation of the nationalistic cult of King Alfred - and, more bizarrely, of the 'flying king' Bladud in Bath.

As Pat Hardy explains, the presence of a significant group of artists working in London prior to Canaletto's arrival, led by Samuel Scott, along with the strength of existing artistic practices and traditions and the vibrant print market for maps and surveys of London, suggests that the impact of the arrival of Canaletto was more complicated than may have previously been perceived. At the same time, Canaletto's legacy survived throughout the eighteenth century, in the hands of native artists such as William Marlow.