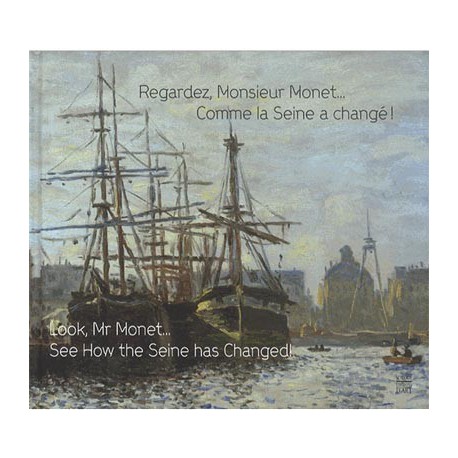 Claude Monet is the tireless passenger of the Seine valley. He is the modern traveller, who takes the train or the boat, looks around him and notices change.

Monet, evidently, he of Impression, Sunrise, which gave for ever the faint contours of port activity as a new way of sensing the world, of diluting the regard in light,” as Philippe Delerm writes in this work.

This book is a route articulated around a dozen of Claude Monet’s works presenting the river, maritime and port activities along the Seine. These world-famous works, become icons, are set in perspective against other regards, those of photographers, who, too, have been inspired by these subjects.

A visual promenade thus follows from Paris to Le Havre through more than a hundred photographs by Gustave Le Gray, Henri Cartier-Bresson, Robert Capa, André Kertész, Marcel Bovis, François Kollar, René-Jacques, Roger Parry, Jean Gaumy, John Davies and many others, such as these unpublished images of the port collections of Paris, Rouen and Le Havre.

This book suggests clues to understanding the metamorphosis right up to today, which can be seen as much in the landscape and occupations, as in the social mores and the relationship to water, to the Seine, and to the sea.