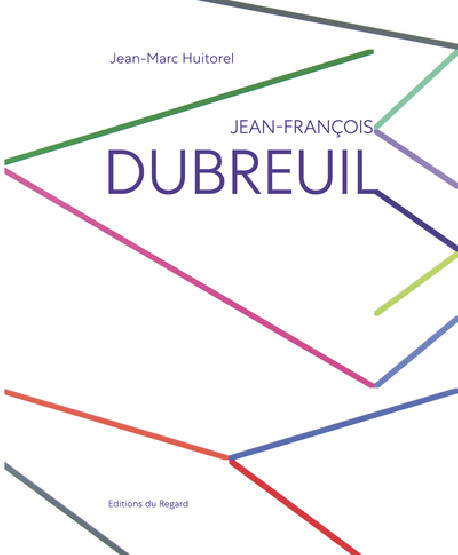 Jean-François Dubreuil’s paintings are striking. Bold colours, juxtaposed rectangles, backgrounds saturated with solid colours or well-endowed with whites broken by grey or yellow, where parallelepipeds take over, surrounded by these same colours which, elsewhere, filled the whole background, sometimes crossed by diagonals.

The effect thus produced immediately places this painting on the side of a geometric abstraction that was thought to be in the past, were it not for a few resistance fighters engaged in the beyond, or the below, we do not know, of history. However, on closer inspection, or over a longer period of time, there is something wrong with this foregone conclusion, but what? Although there is no lack of lures at the heart of this oeuvre, a first observation, which authorizes all the others, is essential. Jean-François Dubreuil belongs to a species of artists who haunted painting, and particularly French painting, at the end of the twentieth century, without being noticed or recognized most of the time. This species is that of the conceptual painters – crypto-conceptual, to be more precise. It is from this premise that the study of an oeuvre, permeated with Dadaism and that plays with academic abstraction, can be envisaged.

Nevertheless, it was indeed the press, with its newspapers and magazines, its dailies and weeklies (rarely its monthlies) that served as his exclusive reference point, his formal source. This taste for the newspaper, for reading it, for taking hold of it, for the sociality it implies, is fundamental to Dubreuil’s work, deeply inscribed in his way of being and in his life. It is worth emphasizing this now in order to avoid an overly mechanical interpretation of his work. In a way, Dubreuil loves the newspaper as Jacques Villeglé loves the poster.

Red, grey. And then black when Dubreuil decided, quite quickly, to treat photographs as well. This triple chromatic attribution would never change. A little later, colour would be introduced. It should be specified that for the artist, at this beginning, at this time of setting up the system and his method, neither red, grey nor black are colours, just tools for discriminating surfaces.

Although the history of painting constantly oscillates between the artist’s proclaimed freedom and servitude, whether voluntary or not, we have to wait for the development of a contemporary rhetoric, both literary and pictorial, to witness, through the use of constraining systems, the blossoming of works whose premises most often belong to contexts outside art. As far as literature is concerned, and to stick to the French example, the role that Oulipo has played, and still plays, in the elaboration of a corpus of texts based on an updated use of rhetoric is fundamental. The way in which Dubreuil applies to his oeuvre a series of constraints that do not conform to the usual rules of pictorial art by itself means he can be considered an Oulipian painter. However, he is far from being the only one to have drawn from the infinite reservoir of systems and constraints during the 20th century, where random mechanics, pure chance, but also humor and facetiousness for some, occupied a central place.

Jean-Marc Huitorel, Excerpts of the monograph

Exhibition Jean-François Dubreuil, Lures and pleasures of a conceptual painter, presented at Galerie Lahumière (21 May to 9 July, 2022)