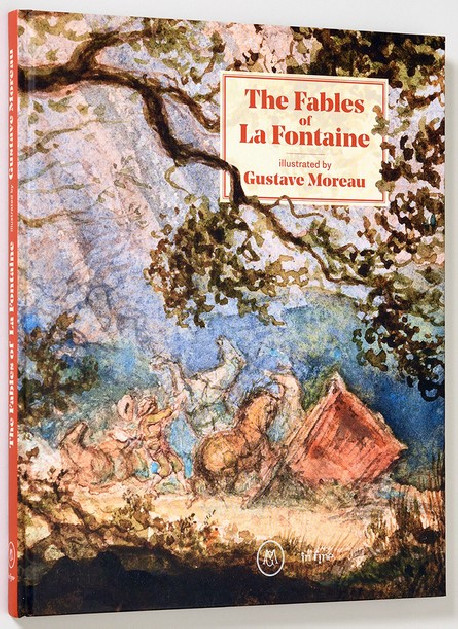 The Fables of La Fontaine illustrated by Gustave Moreau

The story begins much like those tales that lulled us through childhood. Once upon a time a collector, Antony Roux (1833-1913), native of Marseille and great art lover, commissioned Gustave Moreau (1826-1898), the renowned history painter, to illustrate the Fables of La Fontaine (1621-1695).

Conceived originally for the sole enjoyment of the collector and intended to comprise a single book, sixty-four watercolour masterpieces were produced between 1879 and 1884, at 14, rue de La Rochefoucauld in Paris. Twentyfive of these watercolours were shown at the Society of Watercolourists’ private salon in Durand-Ruel’s gallery at 16, rue Laffitte; and later, all of them could be seen at the Boussod et Valadon gallery (formerly Maison Goupil) at 9, rue Chaptal, and at the London branch of the same gallery in 1886.

In 1906, almost all of these watercolours were gathered together one last time, in their near entirety, under the aegis of Robert de Montesquiou and Countess Greffulhe. Thirty-five of them (twenty-nine others having disappeared) have reemerged today, on the occasion of the exhibit dedicated to them by the Musée National Gustave Moreau, formerly the very workshop where they were created.

Our hope in publishing these thirty-five fables and Gustave Moreau’s illustrations at the dawn of the 21st century is to make them as popular as those of Gustave Doré in their time, and to relive the childhood joy of the sole illustration alongside La Fontaine’s text. (Extract from the preface by Marie-Cécile Forest)